History of the School

Totara Grove School is situated on Corks Road halfway between Kamo and Tikipunga.

Totara Grove School was opened in 1966 as Kamo East School with 4 permanent classrooms.  Over the following years the roll grew steadily and now peaks at around 325 children.  In 1989 the school’s name was changed to Totara Grove School after the subdivision being developed in the area and to alleviate the confusion created with mail being sent to one or all of the other Kamo schools (Kamo Primary, Kamo Intermediate and Kamo High School).

The name change gives the school a separate identity from the other local schools and also depicts the grove of Totara trees that stand beyond the school swimming pool. It also blends well with the mural of Rata’s Canoe which tells the story of Rata chopping down a Totara Tree.

The mural depicts the story of Rata and the Totara Tree but has been accorded another dimension as it also tells the story of the school itself. 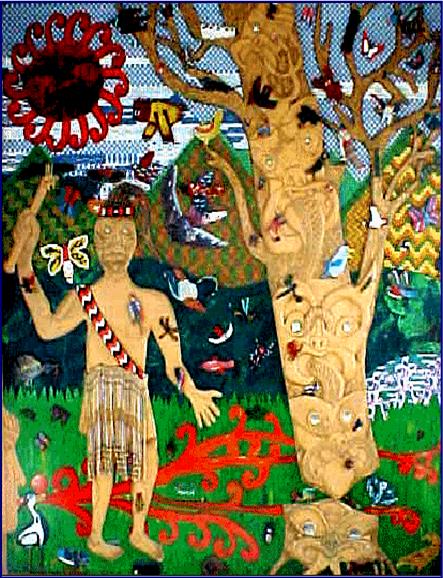 The tree represents the school which in late 1983 was in danger of becoming smaller and losing teachers and therefore was falling in stature. The faces on the tree represent the main areas in the school district. i.e. Charles Street area, Eden Terrace area, Gillingham Road / Corks Road area, Station Road and Vinegar Hill Road area.

During 1984 the influx of children to our school from overseas, as a direct result of the JV2 Project, meant the school was no longer in danger of collapsing. The birds and the insects on the mural represent these children as they help to put the school together again.
Finally the Totara has the significance for the school because of the large specimens of Totara beside the swimming pool, the large groups in the surrounding paddock and the fact that the farm next door is named Totara Park.